A Game Of Monopoly (And It Doesn't Involve A Board)

As a marketer and self-confessed tech addict, monopoly is a word I’ve heard often out of the board game context. Google, for example, is often described monopolising the search market by pushing its own Search Engine through manufacturers being forced to install Google Apps when they’re running the Android OS, something that a couple of years ago landed them with a €4.3billion fine from the EU for illegal practices. Microsoft historically has been accused of the same by not offering up different browsers and search engine choices in its Windows operating systems. It’s a pretty common thing, naturally, a business is going to want to push its own services against those of competitors. It isn’t really until they are forced to change tactics by law, that they actually do.

If you want to read up a little more on the EU vs Google antitrust lawsuits, you can find more info here: https://en.wikipedia.org/wiki/European_Union_vs._Google. Today though, we’re going to focus on app stores after some pretty explosive news emerged last night.

For this article piece, we’ll be focusing on mobile/tablet app stores and 3 most common are:

These are the primary app stores for the respective operating systems of each major platform. What do they all have in common? They all take a 30% commission from app sales and in-app purchases. 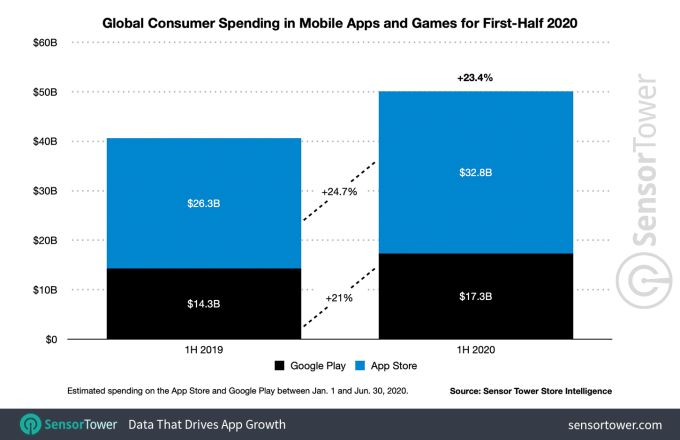 Based on those figures, Google has made over $5billion in 2020 already, and Apple has made just over $10billion dollars.

Despite Android having a larger market share, and typically higher app downloads in number, it isn’t unusual to see Apple making more money simply because iOS & iPadOS is walled off to a point where it’s annoying and quite difficult to install apps from any other source than the app store.

Epic Games, the creators of Fortnite, which unless you’ve been living under a rock, you will have heard of in the past few years, has come out fighting against the app store monopoly and what they deem is unfair charges and anti-competitive.

When Fortnite first launched on mobile app stores, Epic completely swerved the Google Play Store, launching its own installer which had to be manually downloaded from their website (including guidance on how to change the settings to allow apps to be installed from ‘unknown sources’). Doing this meant that they completely swerved the Google Play Store, and it’s 30% commission on in-app purchases, which for Fornite, relates to V-Bucks which allow you to buy in-game cosmetic items and the battle pass. Big win for Epic as they kept the entire revenue, big loss for Google because they lost out on a fair amount of commission.  Google though does provide

However, Fornite for iPhones and iPads had no other choice but to go on the app store, generating over $500million within a year of launch through in-app purchases, and this meant that based on 30% commission, Apple made over $150million off the back of those sales, despite not having anything to do with the game at all, only hosting it on the App Store, because Apple doesn’t allow app installations outside of the App Store unless you jailbreak (which could leave your device unstable or vulnerable), or use one of the shady alternatives which work through certificates and you have to reinstall apps all the time as the certificates expire because they’re technically development apps and you’ve no idea what those apps are doing (do not recommend this at all).

Fast forward to this week and Epic made what seems to be a server-side change and added a change to the Fortnite app on iOS/iPadOS. It offered the ability to buy V-Bucks through an in-app purchase, or, buy V-Bucks directly from Epic Games at a discount price. A sure-fire attempt to work around the App Store commission system. Apple caught this out, and removed Fortnite from the App Store but breaking it’s TOS. Apple’s TOS clearly states that you cannot direct a user outside of the app to make a purchase – end of story, no exceptions. Other apps, such as Spotify, charge a premium on top of normal costs for users buying through in-app purchases to help claw some of that revenue back, but they don’t encourage users to buy through other methods.

Epic Games, ready for battle from the offset, began the #FreeFortnite campaign with a bang. A live video stream right into the game, and a social media campaign to capture an even bigger audience. This is the video, taking obvious inspiration from stormtroopers.

350,000,000 players worldwide, a huge social following, it’s own game store rivalling Steam and undercutting the commission percentage at just 12% vs 30%, Epic Games has some serious weight behind it. We’ve seen other apps come out against Apple in recent months, but not with enough push, or enough backing to see it through. Within hours of Apple removing Fortnite from the App Store, they submitted legal filings to court and they’re suing Apple.

App Store was the top trend on Twitter last night, Fortnite closely behind it, and Epic Games being the juggernaut that it is now, has the capacity, and the cash to see this through to the end. Not long after it was removed from the App Store, Google also removed Fortnite from the Play Store for the same reasons, so Epic Games are suing them also.

A lot of these cases go on for years and years because of appeals so nothing will happen immediately. If you have Fornite installed on iOS already, you’re ok for now, but as the new season launches soon, you won’t be able to update the app which means no new content, and no new battle pass, so a bit of a bummer if the cosmetics side is really your thing.

30% commission across App Stores seems to be just the default, and it always has been, right back to when they first launched. Is it fair that such a big chunk of the commission goes to companies who have no input into the apps themselves? Is it warranted to argue that because of the power these companies have, just having your apps on an App Store potentially exposes them to billions of users and that’s enough to justify the commission?

As I said above, Android has the ability to install apps from whatever sources you want, whether that’s from a website or an alternative app store, you can do it as long as you accept the security risks that come with it. Apple tries its damn hardest to make sure it’s as difficult as possible to install apps on iOS/iPadOS from anywhere other than the App Store. If a developer chooses not to launch on Apple Devices, they won’t lose 30% of all revenue, but then they also withdraw themselves from a billion devices of potential customers.

The power and influence that Apple & Google have, the ability to remove apps instantly cutting off revenue streams and hindering the ability of other companies to grow and compete in the market. That is the App Store Monopoly and Apple won’t back down without a serious fight.